My article below appeared in the January issue of Hill Country Happenings..  Click here for more articles and information about happenings in the Texas Hill Country.

In my column last month, I wrote about Johnny Manziel’s name being in the mix for the Heisman and the comparison to past Heisman winner Doug Flutie.  At that point, it still was unthinkable that even Johnny could sway a voting history who never gave a freshman the nod.   Who would have thought?  Personally I wanted it to happen but even this lover of Cinderella endings had her doubts.  Ye with little faith… 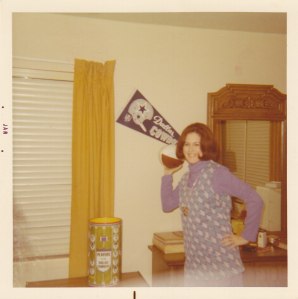 It’s the Texas Hill Country and most everyone living here has a Johnny story.  Mine started when my husband and I attended a tour of homes at Comanche Trace.  At one of the houses we were greeted by the owner.  She proceeded to proudly show her home.  We came to a doorway.  “This is my son’s room.”  She stepped back.  I immediately fell in love with the room.  It was decorated to perfection only a sports fanatic like me could understand.  At that moment, I visualized my own room when I was in high school.  Leaning in the corner were my batons and tasseled drill team boots.  On the dresser were cigar boxes containing my baseball card collection.  There was a Dallas Cowboys pendant as well as an unexplainable framed photo of Ole Miss Quarterback Archie Manning on the wall.   Yes, I appreciated the tour room I was in —oh by the way — the tour guide was Michelle Manziel and the son’s room was Johnny’s.

A couple of years passed.  My boss came to work one day and proudly announced that his son was named the kicker at Tivy.  My husband and I attended the next home game for the Antlers.  My boss Mickey was high fiving and after each great kick, he’d stand and say “That’s my son!”  Yes, Tyler was a fun kicker to watch as his willowy leg nailed each kick.  However, there was another player who garnered my appreciation even more.  It was the Tivy quarterback.  He was a machine.  He found his wide receivers and when he couldn’t, he kept the ball himself churning up major yardage with most of his runs.  I knew then that number two was special.

Fast forward to December 2012.  It’s Heisman week.  Every lead story both on TV and in the papers was all about Johnny.  Even Texas Longhorn fans were giving thumbs up to the Aggie.  Watch parties were on tap for several eateries and bars.   I knew better and stayed home to stand one foot from my TV screen and take in every moment.  I also didn’t want other fans to witness the mascara running down my cheeks as Johnny was announced the winner.  Yes, I’m the whole package when it comes to being a fan!

The next moments were endearing as the cameras panned the room while Johnny, visibly shaken, gathered congratulation handshakes enroute to the stage.   After he reached the podium, he took a deep breath and began one of the most professional acceptance speeches I have ever witnessed.  He acknowledged the members of his team, especially the offensive line.  He talked about pretending to be Doug Flutie when he was a kid.  In the background the Boston College star beamed proudly.  I chuckled as Johnny confessed to playing football in the hallway with his Grandpa then issued an apology to his Grandma for “for all of the things we broke in the house.”  He even accredited his Tivy days – how he was taught “about passion and about heart and what it truly meant to say that Tivy fight never dies.” 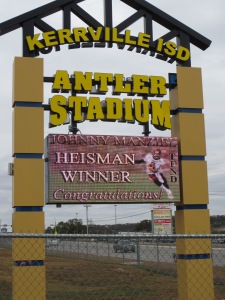 Way to go Johnny!  ‘Lotta Sports hopes this is only the beginning!