Posted by 'lottasports in Football on December 3, 2015

The holiday season is upon us and some of my most fun sports memories are around this time frame. My mom worked for a dentist in Houston who was a Texas Longhorns alum. One Thanksgiving Dr. Senglemann gave mom his tickets to the UT – Texas A & M match in Austin. Well, I wasn’t into the Longhorns since they were so condescending to my University of Houston Cougars who were an independent at the time. So I decided I would root for the Aggies. Imagine my mom’s embarrassment when I was on my feet in the middle of the University of Texas alum section screaming, “Gig “em!” That was the last time my mom invited me to a football game! By the way, A & M won the game.

Every Christmas, I hang a Houston Oilers ornament and as it spins on its blue string, I think back to the first year I got it. It was back in the late 70s when the Houston Oilers were under Coach Bum Phillips. He was fun to watch during games pacing the sidelines, easy to spot with his cowboy hat (except when the Oilers played inside), western style suitcoat and cowboy boots. He coached the Oilers to be a winning team; we referred to as “Luv ‘Ya Blue.” The city lived and breathed Oilers football. Almost every store you entered would have the fight song streaming through the air. “Look out football, here we come …. Houston Oilers, number one.” My blue spruce tree was decorated with blue balls, blue lights, icicles and of course my Oilers ornament. My front door was covered in blue foil with a wreath – complete with blue-ribbon bow and a miniature football.   Just inside my foyer stood a tall bird cage. It was home to a blue and white parakeet named “Bum.” I had Oilers fever bad. Can ‘ya tell?

One of my favorite memories is from New Year’s Eve, 1969. I was a desk clerk at the Holiday Inn on Gulf Freeway and Wayside Drive. That day I checked in the cheerleaders and several Auburn fans that were in Houston for the Bluebonnet Bowl at the Astrodome. They were playing my school, the U of H Cougars AKA Cougar High. One of the guys checking in asked, “Do you allow pets?” I assumed he meant a dog so I replied, “As long as we know and as long as you clean up after your pet.” As I retrieved a dog marker for the room card, another guy said, “Thanks for letting us have War Eagle in the room. Would you like a free ticket to the game?” It turned out that I had just checked in the Auburn mascot. Yes, I went to the game that night despite Houston being a huge underdog. My seat was pretty good — 50 yard line on the mezzanine level. It was a great night — a huge upset by my Cougars 36-7. Yes, I love the holidays with a ‘lotta sports memories. 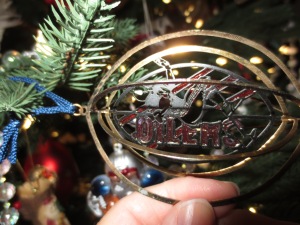 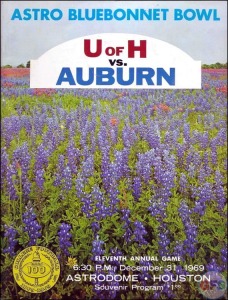