This is my column in the October Hill Country Happenings magazine.

Fall is my favorite season of the year — cooler temperatures, leaves changing colors and Fantasy Football! High in the hills above Kerrville, we convened for our annual draft. The twelve of us chose a place to sit; most of us camped out at the long table adjacent to the draft grease-board. Commish Alek stood at the kitchen counter, hostess Laura manned the food area and Brad set up a command center at the far corner of the room. Brad carefully guarded his post which included facing the laptop screen out of view of all of us and neatly stacking his notes. My brother brought his secret weapon too, a computer drafting program. Rick had two draft magazines while I chose to go with the one day-old computer printer out. We had the same participants as last year except for Roger who passed away mid-season and he was replaced by a guy named Eric. When I exhibited my scar, plate and protruding screw on my left elbow, several joked to the newcomer that I had tripped over the tennis ball on my walker. I’ll have to admit. That sounds better than doing it walking the dog!

First was the Rookie Draft. I drew number nine and ended up with Latimer of the Broncos since my wish list of A & M’s Evans and the Buckeyes Hyde were gone. I figured anyone catching balls from Peyton Manning was a pretty good gamble. Mid-way through the second round, Ralph posed the question, “If a rookie is not picked in the second round, can they still be picked in the regular round?” The answer was yes; Ralph took a running back for the Patriots. When it got back to me, Manziel was still available. I toyed with the idea of picking him but at that point, Johnny was still the announced back-up. I settled on Matthews, a wide-receiver with the Eagles. We were down to the last rookie pick by newcomer Eric. As he wrote his choice, his body blocked the easel. When he stepped back, a roar left our mouths and Ralph slammed down his pen. In Eric’s block were the words, “T.F.ND. – QB CLEV.” The initials stood for Tivy Fight Never Dies. No one needed a name. Much to Ralph’s chagrin, Mr. Manziel was no longer available.

We took a quick break for people to load up their plates with food before the main draft started. Instead, I opted for the restroom since I didn’t want to miss any of the selection process. I chuckled as I entered the bathroom. I’ve been in the league several years and gone was the potty chair on the toilet. I wasn’t gone long and I came out to find all the numbers except for two drawn for draft order! I swirled my hand through the two numbers. I could sense it was going to be a bad draw and reluctantly opened the folder paper. Two! And the unchosen? Number One…. Two was quite OK. This year I scrubbed choosing my favorites and went with whatever fell in sequence with what the experts went with. As in every year, the Commish’s strategy for his picks immediately blew up when Rick drafted quarterback Aaron Rodgers third. Alek shook his head again in the third round when I took the first Defense. Ok, that was a deviation from the book’s order, but isn’t a woman’s prerogative to change her mind? Besides, I knew it was driving the Commish crazy.

Of all our drafts, I think this was my favorite so far. Despite the intense looks on the participants, humor dominated the entire afternoon. While Laura was on break, her mom AKA Ralph’s wife, was chosen to “guard” her daughter’s notes. Instead she picked up Laura’s folder, got a devious laugh and broadcasted, “Hear ye, hear ye….Would you like to know who Laurie is going to pick?” When Brad drafted Ron Gronkowski, he grinned at me and said, “That’s Polish for broken arm.” There was also the blonde moment by my sister-in-law Tonya where she studied her picks and carefully scribed, “Emmanuel Sanders WR DEN” on the board. Brad strolled up behind her and quipped, “Tonya, I make my own picks…thank you” as he gently erased her pick out of his box. During a discussion of why the Oilers had changed their name to Titans with the move to Nashville, my brother Craig had an explanation. “Oil has nothing to do with Tennessee” long pause “Although, there was the Beverly Hillbillies.” The first kicker to go was in the 7th round. When Tonya wrote “Phil Dawson K SF,” the room groaned. A look of panic spread across her face. “Has he lost a leg or anything?” she asked. Our group never tips their hands. After all, in fantasy football, it’s all for one & one for all! 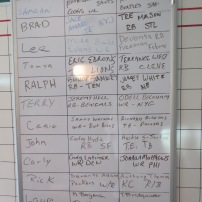 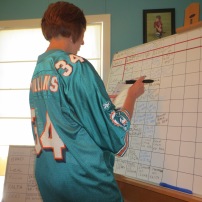 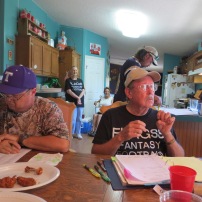 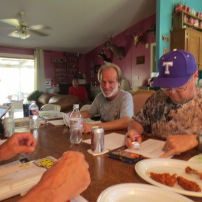 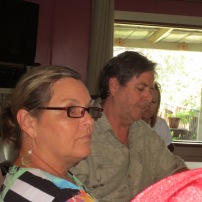 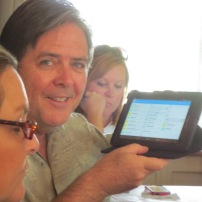 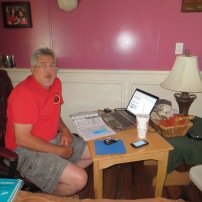 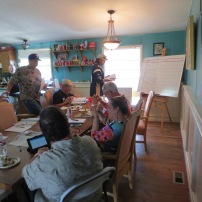 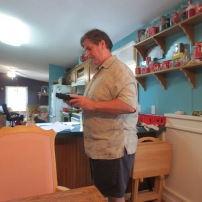