I really should call this post “Redemption Time” instead.  Backtrack to pregame of game two.  I discovered a gate down by right field where the players came from the locker room and out onto the field for warm-ups.  Rick’s “assignment” was to get pics of me with the players.  My favorite on the team is Ryan Fitzgerald and easy to spot with his long locks and toothpaste commercial smile.  I was standing next to two “older” guys waiting for autographs when Ryan answered their call-out.  I excitedly looked up towards Rick and he was there at his post, camera ready.  Ryan first signed for a guy with a book of college baseball cards, then the guy next to me.  Finally it was my turn — no cards or program to sign — but I did get a huge smile from him as I told him I had called his 7th inning home-run the night before.  “Really?   Why didn’t you do it sooner?”  We both laughed.  Our chat lasted about 3 minutes, then Ryan headed out to the field as I maneuvered through band members waiting for pregame ceremonies.
I didn’t see the pictures until we got home that night.  Here is “The Moment!”  Seriously Rick?!?!? 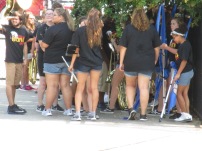 Now on to the game three — the series was tied at one game each — and redemption time for Rick.  Unlike the other two evening games, game three was a very warm afternoon start.  Upon arrival at the park, we proceeded to the right field gate.  There were a couple of players on the phones under shady trees.  Meanwhile, I felt sweat trickling down my back at the shadeless gate area.  Soon, the two older guys left the area under the stands and joined me as the players emerged.  The first guy now had a notebook of 5 cards of each player!  The guy next to me had a program and I had my program insert along with my fine tip Sharpie.   Players were stopping and signing.  Ryan emerged from the building.   As he started across the lot, I glanced up towards Rick.  He was craning his neck out towards the parking lot where a limo has pulled up!!  Not again!!  The two guys and I chimed in unison — “Hey Ryan!”  Finally a break for me — he came to me first!

And yes, Rick redeemed himself as you can see!! 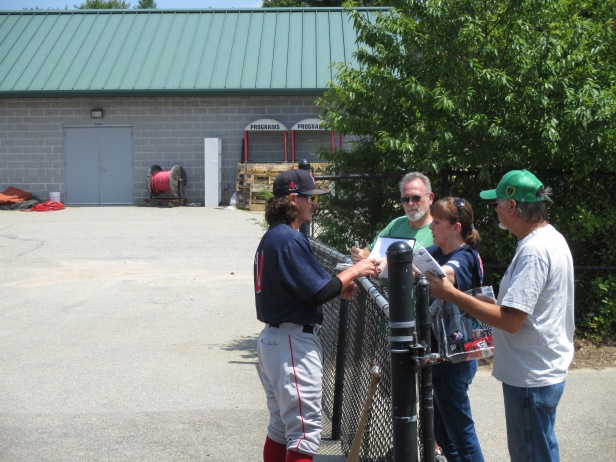 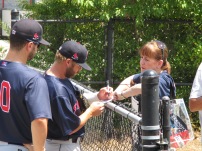 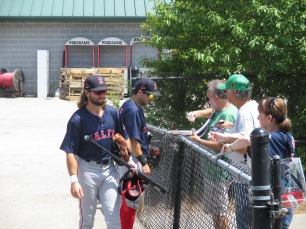 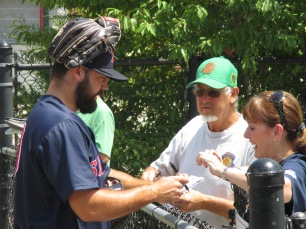 The game was great too.  We were next to the dugout like the first night and even stayed in the shade until the 9th inning.  Ryan ended up with 2 runs, 2 hits, hit by a pitch, a stolen base and a dirty uniform.  A little excitement in the 7th when the manager and catcher for the Mudcats were thrown out of the game.  The Salem Red Sox won 4 – 1. 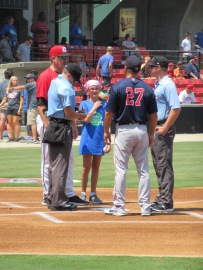 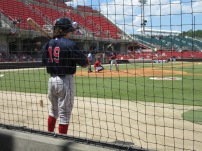 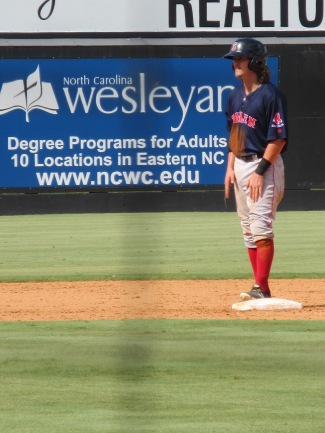 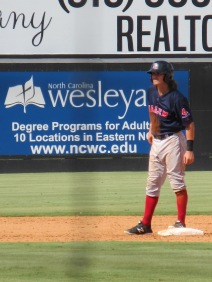 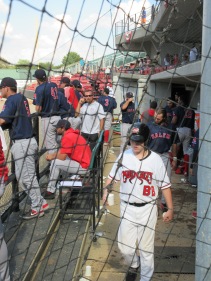