Last month NASCAR returned to Texas. The first sign of life at the track was the miniature city of RVs and tents which spouted up around the perimeter starting the week before. Wednesday night found the haulers for the truck series scheduled in followed by the ones for Nationwide the next morning — or so the published schedule claimed. I camped out on the pedestrian bridge early Thursday to gets pictures and hear the toot toot of my friend Eloy’s hauler. After an hour of no movement from the staging area, I texted Eloy asking how much longer it would be — I needed a bio break! He texted back, “LOL — well, I’m going to Walmart to do a little shopping – go ahead and pee.” It turned out the times had been changed to the evening. The wait was worth it as we watched the parade of lighted transporters against the backdrop of the setting sun and later the darkness.

Friday’s fun included watching practices and qualifying. With the purchase of our pit passes, we had a pretty good view as the cars zoomed out of the garage area and onto the track. However, as the day went on, the crowd cloned. Grown men literally knocked over women to get a look at their driver. On tippy-toes, I finally found safe haven and a good view from atop a barricade. Speaking of barricades, one separated me from one of my favs, Brendan Gaughan. “Hey! Brendan!” I shouted. When he saw it was me, he backed up and reached across the barrier giving me a bear hug. “Did you get a picture of my bear hug?” I excitedly asked my husband. “No, I was waiting to take one of Matt’s car. It was then I discovered we had way too many favorites.

The fun of race weekend is meeting other fans. While watching the cars practice, I chatted with a photographer standing next to me. I detected a Midwest accent so I asked him where he was from. “Hi… Larry…east side of Cleveland, “ he replied as he extended his free hand. I laughed and pointed at my husband. “Meet Rick….west side of Cleveland. They proceeded to talk Buckeyes and Browns football with Larry photographing the cars at the same time. There also was an “older” red-head who I spotted chasing down a golf cart containing Carl Edwards. Upon meeting her the following day, I found that Shirley was just as avid a motorsports fan as me. She was thrilled when I told her I had captured a pic of her with Edwards. My favorite fan was a little boy named Landon. I asked him who his driver was. “My uncle,” he replied. The uncle turned out to be Nationwide driver Jamie Dick who came over and gave him a hug. Since the race was during football season, there was a mix of fans wearing their favorite team or player jersey. Although, Jerry Jones claims to own “America’s team,” Cowboy fans were outnumbered by the Saints, Broncos, Texans, Bears, Packers and Steelers in the apparel wearing department. Those most fun to view were the couples who wore different NASCAR drivers apparel. Interesting combinations made for jabbing at their spouses in the stands. Although Rick and I are miles apart on football teams, we do like the same drivers.

Prior to the races, I talked to pit crews and officials as they set up and prepared their areas. As I entered pit row, I spotted my Twitter friend Chris Taylor, rear tire changer for Matt Kenseth. Despite being entrenched in a sea of tires, he snuck in a cute grin as our cameras clicked away. Further down, I spotted a female checking tires for the #66. During a quick chat, I learned from Liz that she was the only female on a Cup pit crew. A few yards away from her, I met up with Kevin, an official in a bright orange jumpsuit. He camps out at the pit in case of fire. I told him about witnessing a fire last year when Kenseth’s car had one during a pit stop. Yes, Kevin has job security. An interesting stop was at a computer display lined up with the start/finish line. NASCAR official Dona Harris explained that the equipment measured where each driver was in the race. She said it was the equivalent of a photo/finish shot at a horse race. Towards the end of our pit row stroll, I had my “This could only happen to me” moment. I got to a pit area which had a smaller number of tires and I turned to Rick and said, “This is one of the smaller teams not in the limelight.” A nice-looking tall, lanky guy approached us so I said, “Now, what is your job on the team?” He smiled… “I am the driver….” he replied. I composed myself. “Are you going to be changing into a racing uniform?” I asked while pointing at his black slacks. Hello to #33 Timothy Hill. Needless to say, the other crew member was amused. The rest of the day I kept thinking to myself, “Where do I know that Hill guy from?” (Upon googling I found that he had rear-ended MY driver during a caution earlier in the year!) On the way to our seats, I passed a display of the bracket for the Chase. The drivers’ names and numbers had Velcro backs so fans could post their individual predictions. After I reset the display, I posed for Rick. He handed me the camera saying, “Did the picture come out?” As I looked at the picture, up walked George Reba, sports with WFAA TV. As the cameraman filmed, Reba questioned me on how the bracket worked, and then asked me my favorite driver. Meanwhile, I still had Rick’s camera in my hand behind me frantically waving it to Rick in hopes of getting a picture with George! After the interview, George said he planned to run the segment on the late sports.

Our seats were in the center of the row and the people on each end were not very accommodating. One time I was forced atop the seat panel and I teetered with uncertainty with each step I took over the jackets, blankets and food on the bleacher. One guy reached over to help me and caught his heel in the bench, then fell into the next row. It’s probably the last time he will ever come to anyone’s rescue. The race itself was rather boring until the last five laps when Brad Keselowski wrecked crowd favorite Jeff Gordon. This led to a brawl on pit row with the two drivers and their crews after the conclusion of the race and our seats were right across from the melee! When I got home, I stayed up until after midnight to watch a rerun of the sports. Alas, the clips with George were axed to cover the fight on pit row.

My article below appeared in the April issue of Hill Country Happenings..  Click here for more articles and information about happenings in the Texas Hill Country.

I love the month of April!  I know….. I say that every month, but April is better than most because it’s the start of the Major League Baseball season and NASCAR returns to Texas Motor Speedway.   I remember when we lived in North Texas in the 80s, Rick would go stand in line for hours to get opening day Rangers tickets and I would strategically bid my line of flying so I would have that day off.  This year we skipped the experience of the home opener as the team looked rather vulnerable during spring training and deserving of the tag, “Texas Strangers.”  Will the Rangers make another run to a championship game or leave fans scratching their heads in October?  As they said in my cancelled soap — now returning on Hulu — stay tuned!

As I write this article, I am holding my tickets for the April Nationwide race.  It is storming outside, indicative of April weather.   While I listen to the pounding rain, I think to myself, “Just get it over with now!”  I remember back to the first year that the Texas Motor Speedway was open.  Rainy weather played havoc on the grassy parking areas where the caravan of RVs gathered for the week of the race.  Tow trucks made a mint dragging out the camping homes of race fans.  Since we lived 5 miles north of TMS, Rick & I always bid our work schedules around race weekend and being able to get to work.  One year, the Sunday race was postponed due to weather.  The following day, I found myself in my car, staring at our subdivision with my legs crossed for one hour as inbound traffic to the area was halted to accommodate those leaving the track. 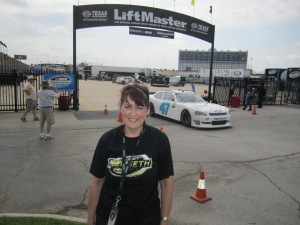 Lotta Sports in front of the Garage Entrance

Last year, I got tickets and pit passes for the Nationwide race.  I was like a kid in a candy store as I spent the morning and afternoon watching time trials and practice runs from the pit area.  It was where all the action was, including driver Ryan Newman, walking inches from me with his hot dog in hand.  I even visited with Elliott Sadler’s pit crew and was given a rejected lug nut they had discarded.  In the midway, there were huge semis, one for each driver, with multiple displays of T-Shirts, caps and other memorabilia for sale.   I stopped at the Danica Patrick area and picked up a bright glow-in-the-dark lime green T-Shirt for Rick, then headed to Kenseth’s semi for MY stuff.  Why am I a Matt Kenseth fan?  He had a special connection to the Texas Hill Country.  A few years ago, he purchased a Mooney Acclaim, which Rick helped build.  Matt actually came to Kerrville to take delivery of his plane.  He gained several fans from Mooney that year.

The race itself was almost boring after all the other activities.  I said almost, right?  My ex-boss from Delta, Jan Smith, joined me at the race.  After she bought a Tony Stewart T-Shirt, she did a quick change of clothes in the restroom.  We climbed about 40 rows to our seats and got all settled in for the race.  Suddenly Jan’s hands flew up to her chest!  “My lanyard with my ticket!  Where is it?”  She bolted and retraced her route to the restroom and fortunately found it on the floor of the last row of stalls.  She got back just in time for the opening ceremonies.  We decided to stay for only part of the race, not wanting to battle the exit crowds.  It was a good thing we got an early start since we couldn’t find either car!  All I can say is thank goodness for remotes that enable you to activate your horn!  Once we left the parking lot, I got a call from Jan on my cell.  “You’re going the wrong way!  You’re headed towards Decatur!”  I surely am glad Rick will be with me this year; he’s got a much better sense of direction.