It has always amazed me how football players who make lunging catches and scrape across the solid turf, get up like nothing happened.  Unfortunately, some don’t.  Instead they end up carted off the field in excruciating pain, loaded in an ambulance and within hours, are in surgery.  Weeks or months later they return to the playing field, but what happens in between?  I have lived it first-hand.

Not for the squeamish!

It was easy post-surgery with a catheter hooked up and food as well as pain medication coming in intravenously.   I figured with my right arm in a sling and left arm in a full cast I would be in the hospital for a few days.  Not so!  They had me up and walking in the hall, flashing in my hospital gown with an aide, toting all the equipment I was hooked up to, behind me.  I was released within an hour of that feat and sent to my first rehabilitation center.  I found out quickly that those places are a combination rehab, long-term care facility and nursing home.   Seeing the reality of “health care” was downright scary!  The main contacts for my needs were the aides and they would determine if a nurse was warranted.  The sad part was the aide-to-patient ratio was ludicrous so getting an aide to answer the call bell was the challenge.  Now having been a flight attendant, I understood how some overuse the summoning device.  However, in my case, I had no use of either arm or one hand so when I rang the bell, help was definitely needed.  I hated counting on others and it really sapped the dignity out of me.  Thanksgiving night proved to be a turning point when no one was answering my call light.  It was either wet the bed or improvise.  An hour later, a text of my accomplishment was heard ‘round the world!  The recipients at midnight I’m sure thought I had been in someone else’s meds.   I was free at last — to accomplish all the tasks involved in going to the bathroom by myself!  Perhaps I could get my “walking papers!”  Not so fast!  The doctor and my hubby’s concerns were the dogs jumping on me and reinjuring something.  As it was pointed out to me, one of those dogs was the cause of me to being in there.  I was not pleased with the news of two more weeks of a rehab facility.

Fast forward to the second week of December and my next doctor’s visit.  Dr. Lue was pleased with the healing of my left elbow and shoulder.  Not only was I getting to go home, but I acquired a contraption for my elbow instead of the sling.  Remembering my interest in football, Dr. Lue proudly communicated that it was the device football players wore when they returned to the playing field after elbow surgery.  The next thing I knew I nestled in an almost two-foot mechanism which felt like about ten pounds on my arm.  It was locked in ninety degrees forcing my elbow to stay in place.  Do think there was a problem with the dogs jumping on me after I got home?  Hardly!  Rex wouldn’t even get within two rooms of me!

Rex says,”As long as I don’t make eye-contact with that thing on her arm, I am safe!” 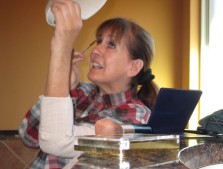 Nothing is easy during rehabilitation.

In December one usually spends it on shopping and tree-trimming.  Not me… I was busy tackling day to day activities like putting on deodorant by zooming my underarm over the container and experiencing several near misses.  Half the time the vessel would end up on the floor spinning like a roulette wheel.  There was also the “Guess How Many Additional Items Will Fall” game each time I was in the pantry retrieving with my grabber or putting on make-up.  Rick had a better appreciation of the art of cosmetology as he tackled securing a ponytail.  One of my personal favorites was the day I turned on the toothbrush just short of my mouth.  I had toothpaste everywhere including my armpit which the deodorant had missed!  There were also milestones like the day I held the hairdryer with my left arm and partially dried my hair.  The hair was disheveled but I was happy just feeling normalcy.

Shall I style with my foot?

December was also for College Bowl watching, but even this sports fanatic got bored with the thirty-five games!  Because bowls are named after their sponsorships now instead of the traditional Orange, Rose and Cotton, I got to know a lot of companies I had never heard of as well as some participating colleges.  All the viewing was worth my dedication as one game I saw a player running off the field wearing my elbow apparatus!  Not only did I see the miracle of someone out there playing football again after my same injury, but renewed hope that someday I would again function in the simple things in life.

recovery from accident with dogs, rehabilitation

This entry was posted on February 1, 2014, 12:16 pm and is filed under Football, Hill Country Happenings Articles. You can follow any responses to this entry through RSS 2.0. You can leave a response, or trackback from your own site.